The kanklės is the Lithuanian manifestation of the Baltic psaltery, related examples of which appear throughout the region (Finnish kantele, Latvian kokle, Estonian kannel, Russian gusli, etc.). The body is carved from a single piece of wood, with a soundboard attached on top. It is played by manually damping some strings and strumming or plucking others.

The development of the Baltic psaltery is debated by scholars, whose competing theories encompass a time scale of one thousand to three thousand years ago, with roots variously given as: within the region; an ancient lyre imported from Rome or central Europe; or some other instrument imported from Asia. Pursuing a connection to my maternal family heritage, I joined Sodauto, the Lithuanian Ethnographic Ensemble of Boston (sadly, now inactive), from whom I learned to play, and who loaned me the instrument I use. Ačiū labai! 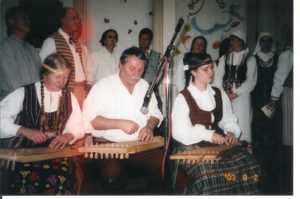