Others have written extensively about the dolceola, so please do see the links below for deep and juicy detail!

In brief, the dolceola, made by the Toledo Symphony Company in Ohio from 1904-1907, is a miniature piano with two chromatic octaves of regular notes for the right hand, plus, for the left hand, an accompaniment system, organized into seven chords, with keys in groups of three: bass, alternate bass, and major chord. (Yes, a whole chord produced by striking just one key!) This elegant system is the functional equivalent of piano accordion buttons, which also provide bass, alternate bass, and chord.

I am indebted to my soul brother and fellow fretless zither enthusiast (better known as a great blues guitarist!) Andy Cohen, who facilitated my acquisition of this instrument from Caroline Paton of Folk Legacy Records. 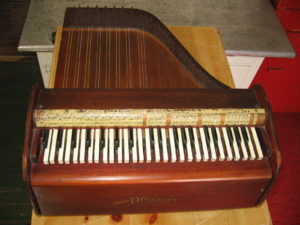 I haven’t recorded with it yet but do have a video featuring it. Written in 2011 about Maine’s infamous Gov. Paul LePage, it’s a bit dated, but you might enjoy it!