“There are speculators all about, you know
Who are sure to help each other roll the ball,
As the people they can fleece, and then take so much apiece,
While the farmer is the man that feeds them all.”

-from “The Farmer Feeds Us All” by Knowles Shaw, from Grange Melodies 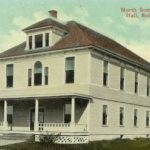 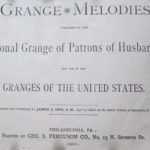 As a brief history on the Maine State Grange website explains, the Grange “came into being in 1867 because of the vision of Oliver Hudson Kelley, a Minnesota farmer and activist. He had long held that farmers, because of their independent and scattered nature, needed a national organization that would represent them much as unions were beginning to do for industrial workers. Farmers were at the mercy of merchants for both needed farm supplies and for marketing their crops. Railroads and warehouse companies were taking advantage of farmers as well.” 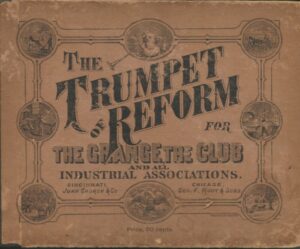 “Kelley and some of his friends organized the National Grange (officially known as the Order of Patrons of Husbandry) as a fraternal group similar to the Masonic lodge. The early leaders were responsible for promoting cooperatives that had the potential of helping farmers economically. Effective lobbying efforts were undertaken early and this activity remains a bulwark of Grange service to rural America. Education of rural residents was championed by the early Grange and, due to Grange agitation, dramatic improvements were made in rural schools. The birth of the Extension Service, Rural Free Delivery, and the Farm Credit System were largely due to Grange lobbying. The Grange at all levels is strictly nonpartisan and does not endorse candidates for public office nor contribute to their campaigns…” 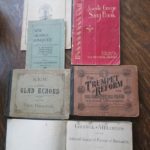 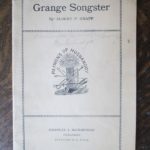 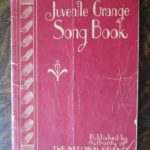 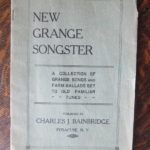 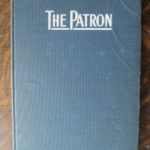 The Grange has a rich heritage of song, with a number of songbooks published from 1874 to the present. (Go here and scroll down for a list.) Inspired by the Grange‘s history of principled action, I’m loving delving into these songs celebrating agriculture and community and lifting up the still unfinished business of the common good.  Here’s a verse from one of my favorites, ” ‘Plow Deep’ ‘s the Motto”, by George Cooper, sung to the tune of G. F. Root‘s Civil War song “The Battle Cry of Freedom“

I’d love to share some of these songs with you! You can sample a short presentation of some of this material here, and here’s a longer program from the 2022 New England Folk Festival. Please be in touch if a program of this music might be of interest to your group. 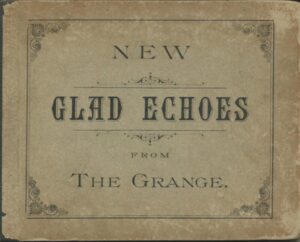