I’m back in Maine after three lovely but colder-than-normal months in the north of England. While in the UK, my true love David and I enjoyed taking part in Folk on Friday singarounds in Richmond, singers and musicians nights at Darlington Folk Club, and the open mic at Scarth Hall in Staindrop (where these photos were taken). 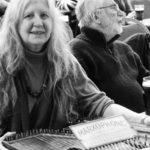 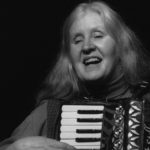 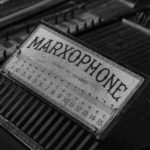 It was also good to reconnect with the Alzheimer Society’s Singing for the Brain sessions in Barnard Castle. Here are our musical leaders Graham and Mike in holiday finery! 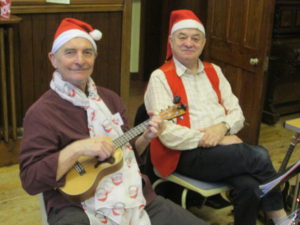 Speaking of Christmas, it was a delight to lead carol singing at our local Quaker meeting in Cotherstone with my Marxophone, ideally suited to the task. 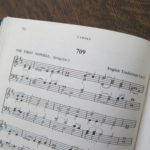 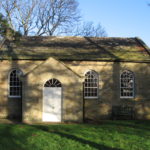 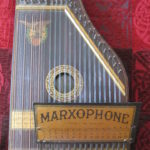 We went to The Witham, Barnard Castle’s community arts center, for two holiday concerts, one by The Holly and the Ivy  and one by Cream Tees, the local youth folk ensemble of the Music at the Heart of Teesdale project. Last year I did a benefit concert for them, and we’re glad they’re still going strong! 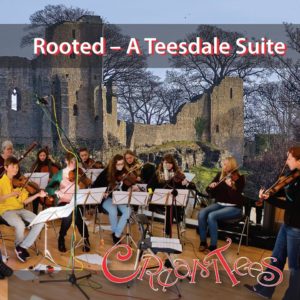 At the Ladies Luncheon Club in Richmond, I had great fun introducing several fretless zithers with UK connections: Faudel’s harp zither (sold by Faudel, Phillips, & Son of London), the lion zither (made by the Anglo-American Zither Co.), and the harpeleik (played by popular entertainer Shirley Abicair on British TV ~50 years ago). 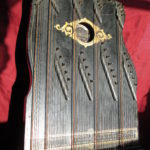 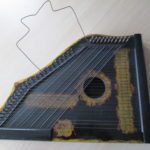 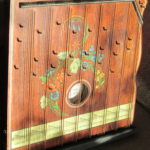 I love prowling charity shops and used bookstores in England (or anywhere)! Some of this winter’s favorite musical finds: 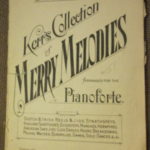 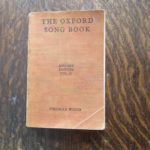 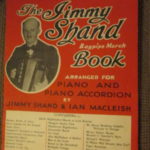 I also acquired a few more instruments in England. As I said in my last post, David got me an excellent keyboard from Gear4Music in York. (Thanks, Love!) I was also fortunate to get, on British Ebay, a very nice used Howard low-D whistle, rapidly becoming a favorite. 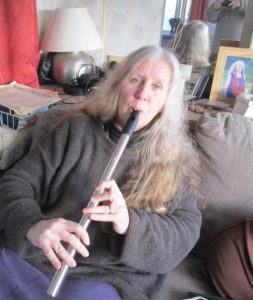 While in England, I also got a few things on US Ebay, just collected a few weeks ago. I look forward to playing this deliciously resonant santur (Middle Eastern hammered dulcimer), and to refurbishing the fairy bells/bell harp, an enigmatic 18th-20th century English instrument plucked and swung (!), which I’m having great fun researching. I include here a photo of a bell harp in the Edinburgh University Collection of Historic Musical Instruments (click to see entire image). 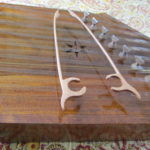 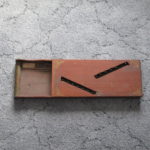 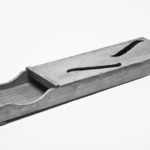 Since returning to Maine in late February and recovering from jet lag, I’ve reconnected with the Denmark Arts Center Songwriters Circle, and have also begun playing in churches again. My nursing home musical work was postponed by a recent snowstorm, but will resume soon. I recently took part in the Lenten concert series at the West Baldwin (Maine) UMC, and am looking forward to a juried Maine Songwriters Association concert coming up in Bowdoinham April 7. 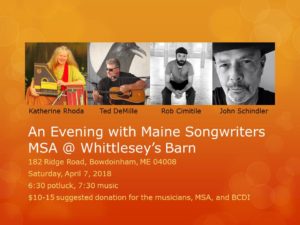 In addition to concerts, I give presentations, liberally sprinkled with music, on fretless zithers. I’m developing a PowerPoint presentation to enhance that work. I’m also pursuing other history/humanities-oriented musical projects, focusing first on the songs of the Grange and how they relate to rural life and populist political movements of the 1800s. So much to learn! And so much to offer up for the common good, under such strain in these times..